“I got to Africa. I got the opportunity to go and learn, not about any animal, but chimpanzees. I was living in my dream world, the forest in Gombe National Park in Tanzania” Jane Goodall 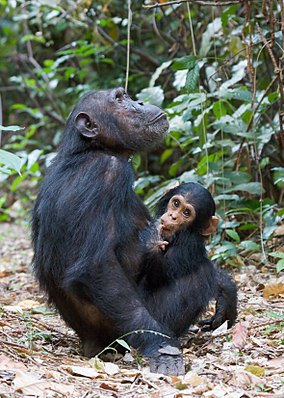 Gombe  national park is the smallest National park  in Tanzania. Established in 1968, with only 3.5 square miles  of land along the hills of the eastern shore of Lake Tanganyika.

The terrain is beautified by steep valleys, and varied forest vegetation  like  grasslands, woodlands and  tropical rainforest.

Interestingly Gombe National park is reachable only by boat. The park is most famous as the location where Jane Goodall carried on her research on the behaviour of  chimpanzee populations in which she established that  chimpanzees share about 98% of their genes with humans.

Aside from the chimpanzees, other often encountered primates are  olive baboons, which are also under study since the 1960s.

A regular hunt of chimapnzees,the red colobus monkey –  hunted by chimps are often spotted here too. Another secretive inhabitant of the forest that you may spot is the bushpig.

The park is also home to  Kasekela chimpanzee community, which has been featured in several documentaries and books.

The park’s  has around 200 bird species including the iconic fish eagle and Peter’s twinspots .

All in all, Gombe National park is a beautiful nature s paradise not be missed while in Africa.

Location: The Location is 16 km (10 miles) north of Kigoma on the shore of Lake Tanganyika in western Tanzania.

Getting there
Kigoma is connected to Dar and Arusha by scheduled flights.

To Mwanza, Dar and Mbeya by rough dirty roads, and to Mpulungu in Zambia by a weekly ferry.

From Kigoma, local lake-taxis take up to three hours to reach Gombe, or motorboats can be chartered, taking less than one hour.