History
Much of the Serengeti was known to outsiders as Maasailand. The Maasai are known as fierce warriors and live alongside most wild animals with an aversion to eating game and birds, subsisting exclusively on their cattle. Historically, their strength and reputation kept the newly arrived Europeans from exploiting the animals and resources of most of their land. A rinderpest epidemic and drought during the 1890s greatly reduced the numbers of both Maasai and animal populations. The Tanzanian government later in the 20th century re-settled the Maasai around the Ngorongoro Crater. Poaching and the absence of fires, which had been the result of human activity, set the stage for the development of dense woodlands and thickets over the next 30–50 years. Tsetse fly populations now prevented any significant human settlement in the area.

By the mid-1970s, wildebeest and the Cape buffalo populations had recovered and were increasingly cropping the grass, reducing the amount of fuel available for fires. The reduced intensity of fires has allowed acacia to once again become established.

In the 21st century, mass rabies vaccination programmes for domestic dogs in the Serengeti have not only indirectly prevented hundreds of human deaths, but also protected wildlife species such as the endangered African wild dog. 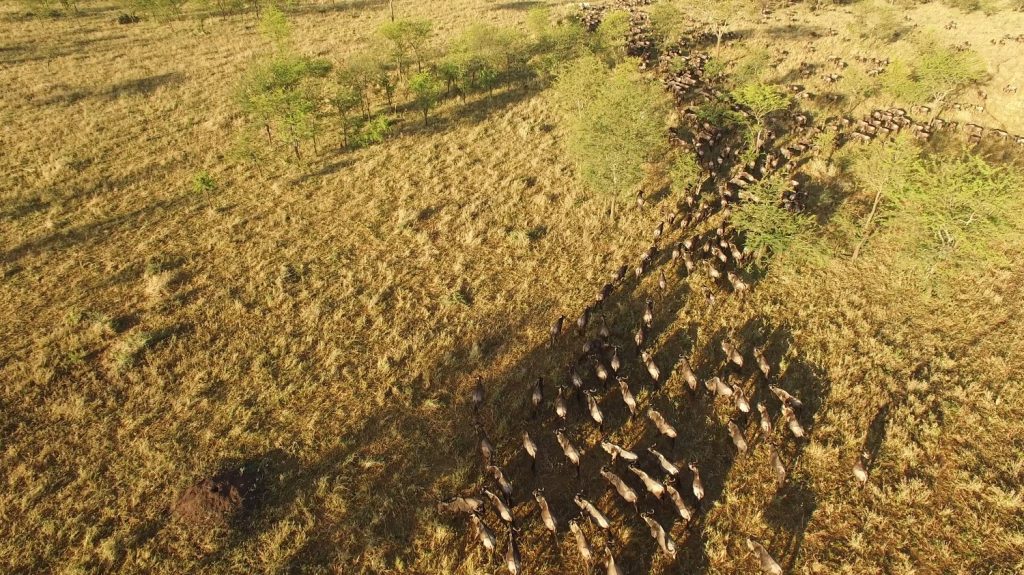 The Great Migration
The Great Wildebeest Migration of giant herds of grazers across Northern Tanzania is a spectacular event. Over two million wildebeest, zebras and gazelles move through the Serengeti in search of green pasture, in a regular pattern. This is surely one of the greatest wonders of the natural world. Each year around the same time, the circular great wildebeest migration begins in the Ngorongoro Conservation Area of the southern Serengeti in Tanzania. This migration is a natural phenomenon determined by the availability of grazing. This phase lasts from approximately January to March, when the calving season begins – a time when there is plenty of rain-ripened grass available for the 260,000 zebra that precede 1.7 million wildebeest and the following hundreds of thousands of other plains game, including around 470,000 gazelles.

During February, the wildebeest spend their time on the short grass plains of the southeastern part of the ecosystem (Checkout the Asanja Moru, Luxury Bush Camp), grazing and giving birth to approximately 500,000 calves within a 2 to 3-week period. Few calves are born ahead of time and of these, hardly any survive. The main reason is that very young calves are more noticeable to predators when mixed with older calves from the previous year. As the rains end in May, the animals start moving northwest into the areas around the Grumeti River (Checkout the Asanja Grumeti, Luxury Tented Camp), where they typically remain until late June. The crossings of the Grumeti and Mara rivers beginning in July are a popular safari attraction because crocodiles are lying in wait. The herds arrive in Kenya in late July / August, where they stay for the remainder of the dry season, except that the Thomson’s and Grant’s gazelles move only east/west. In early November, with the start of the short rains the migration starts moving south again, to the short grass plains of the southeast, usually arriving in December in plenty of time for calving in February.[14]

About 250,000 wildebeest die during the journey from Tanzania to the Maasai Mara National Reserve in southwestern Kenya, a total of 800 kilometres (500 mi). Death is usually from thirst, hunger, exhaustion, or predation.